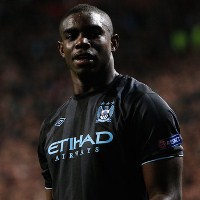 Micah Richards has admitted that the Manchester City dressing room was shocked by their Champions League defeat at Ajax.

The Premier League champions weren’t at the races, despite taking the lead through Samir Nasri before succumbing 3-1.

The England international told Sky Sports: “It’s not something that we’ve worked on a lot, we’re just used to a back four.

“But the manager likes it and if we want to do well with it then we’ll have to work harder on it.

“It’s a hard system and I think the players prefer a 4-4-2 but he’s the manager and we’ll do what he says.

“When we got drawn in this group we knew it was going to be a tough one.

“We’re disappointed today, we thought we would come here and get the three points but it wasn’t to be.

“No disrespect to Ajax but we expected to come here and win, we’ll look to the next game and see what we can do.” Man City To Turn Down PSG Offer For Yaya Toure