It has been reported that Michael Ballack has urged Arsenal fans to trust manager Arsene Wenger’s judgment over Mesut Ozil. 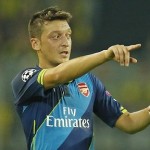 The German legend insisted Ozil was a great player and could get over his rough patch.

He said: “When you a buy a player like Ozil you know his strengths and Arsene Wenger knows I think where he is at his best.

“In his younger ages when he grew up from Schalke and Werder Bremen he was mostly in the (centre of) midfield so he felt very comfortable there but in terms of pace he’s good on the side as well.

“But, he needs to learn how to defend as well because on these winger positions you need to defend.

“At this level, if one player’s out you have no chance.”