It has been reported that Manchester United midfielder Michael Carrick has called for unity after defeat at Bournemouth. 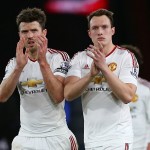 Attention now turns to next weekend’s match against Norwich City and Carrick admits his team-mates must bounce back.

Carrick told MUTV : “The only thing to do now is stick together, get back to the training ground, work hard and perform next week,”.

“That is the only way to put things right, on the pitch. We can do a lot of talking but it’s about results and, starting next week, we have to go on a run.”