It has been reported that Manchester United midfielder Michael Carrick has a ‘good feeling’ about the current squad. 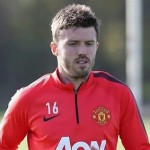 The England international remains positive, despite their worst season record since 1986.

He told manutd.com: “I think you get a feeling when you are in the squad like I have been over the years. You get a sense around the place.

“Certainly at the moment it’s a positive place, we believe we are going in the right direction and we are not far off being where we want to be. It’s just little things and those little things make a big difference. Points count. There is a real feeling that we can still do something special.”