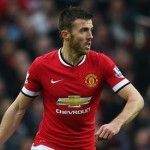 It has been reported that Manchester United midfielder Michael Carrick has hailed their current firepower.

The England international believes United’s upturn in form is partly due to the attacking options Louis van Gaal now has at his disposal.

“Going in to a game with those lads in your team gives us a real threat and a lot of confidence knowing we can create chances and score goals. Against Newcastle they clicked nicely and hopefully in the weeks coming up we’ll see something similar.”