It has been reported that Manchester United veteran Michael Carrick is hopeful of the team quickly improving under Louis van Gaal. 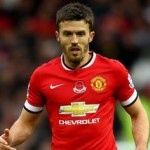 United are currently seventh in the table, exactly where they ended up under David Moyes last season, and Carrick wants to see the team climbing up the table quickly.

“We want to try and keep progressing, we feel like we are but as I said before it’s results that show so now is the time we really need to get a run of results together, to build the momentum to get up that league.” Wayne Rooney Desperate To Be Fit For The World Cup