According to reports from BBC Sport, Manchester United’s Michael Carrick could be sidelined until October after suffering an ankle injury in training. 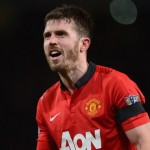 The 32-year-old midfielder, who missed out on a place in England’s World Cup squad, is understood to be facing up to 10 weeks out.

New club manager Louis van Gaal did not give details of the injury suffered by the midfielder when he faced the media for the first time on Thursday.

When asked how long Carrick would be out, the Dutchman said: “A long time.”