It has been reported that Michael Essien believes his former club Chelsea are capable of lifting some silverware this season. 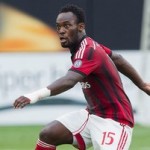 The AC Milan midfielder, who played for the Blues over 250 times during his eight-and-a-half-year stay, feels Jose Mourinho has got the squad to add a fifth top Premier League trophy plus other cups to the Stamford Bridge trophy cabinet.

“Jose has rebuilt the team in his own image now and they’ll fight for everything this season. They have the ability to win things and that’s what they’ll be doing.

“Chelsea have become a football force in Europe in the last ten years and I can see that carrying on for the next ten years or more.”

Mourinho’s side, who host Aston villa on Saturday, currently sit on top of the league table with four wins from five outings with a goal difference of plus 9.