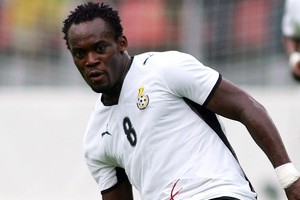 Ghana midfielder Michael Essien has been ruled out of the World Cup finals after failing to recover from a knee injury.

“An evaluation by a combined team of medical experts from the Ghana Football Association and Chelsea Football Club revealed that Essien will not make a full recovery until the end of July,” Ghana’s FA said in a statement.

The Chelsea midfielder has been recovering from a knee injury picked up at the African Nations Cup in January. He played just 45 minutes at the tournament in Angola after suffering a hamstring injury in the Champions League in November.

His loss is a blow to Ghana whose coach Milovan Rajevac last week described Essien as the leader and engine room of his team.

Rajevac is due to decide on his final 23-man squad on Tuesday.

“No World Cup” For Thierry Henry