It has been reported that Swansea City have confirmed the sacking of manager Michael Laudrup. 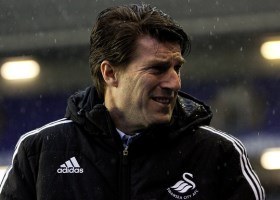 The 49 year old had been under increasing pressure with the team winning just one of their last 10 league matches.

Laudrup’s relationship with the club had reportedly been strained since a disagreement last summer.

The Dane’s reputation was high at that point having guided the club to success in the Capital One Cup and was linked with other positions but stayed on at the Liberty Stadium.

Form on the field, however, appeared to desert him and the Welsh club are now facing the prospect of a relegation battle.

Chairman Huw Jenkins said: “It is a decision we have taken reluctantly, but it’s a decision made in the best interests of Swansea City Football Club and our supporters.

“It is the first time in nearly 10 years that the club has parted with a manager in this way, but we had to remove the constant uncertainty surrounding the club and Michael’s long-term future with us.

“I had a meeting with Michael today in a final attempt to support him and establish a way to improve the work of the backroom team to secure the results we need over the final 14 Premier League games.

“However, after thinking long and hard about the best way forward, I felt it was unlikely we would achieve a stable environment at the club to allow us to get back to basics and produce the performance levels that have served Swansea City so well over the last few years.

“Now we need to put that uncertainty behind us and move forward as a united football club on all fronts, while placing on record our gratitude to Michael for the work he has done over the last 18 months and wish him well for the future.”

Leonardo Confident AC Milan Will Have A Good Campaign