Michael Owen Could Force His Way Into The England Squad 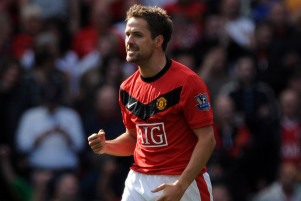 Michael Owen could force his way into the England squad if he stars in Manchester United’s Premier League showdown at Chelsea tomorrow.

England manager Fabio Capello has picked striker Owen in a provisional 30-man squad for next week’s friendly clash against Brazil in Doha and it is believed that he will be at Stamford Bridge with assistant Franco Baldini to assess the star.

Owen, now age 29, is unlikely to start the match but a significant contribution could force him into England contention.

Capello last week described Owen as “my tormentor” and will pick Jermain Defoe, Emile Heskey, Peter Crouch and Wayne Rooney ahead of Owen.

But with Carlton Cole ruled out with a hamstring injury the door is ajar for the United man.

Michael Owen has not played for England for 20 months since coming on as a sub in France.

He was asked after that match the position he was supposed to be playing and responded by saying it was a question for the manager as he did not know.

Since then Owen, who has scored 40 goals in 89 caps, has been banished to the international wilderness.