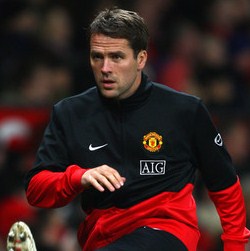 Michael Owen has revealed that he does not want to retire just yet but insists he will not be hanging around anywhere he is not wanted.

The Manchester United striker, whose career kicked off brilliantly as a teenager with Liverpool, wants to finish his career on top and feels he still has what it takes to perform at a high standard.

Owen told Sky Sports News HD : “I love football and I love playing football, but I certainly won’t be one of those players that drops down levels and all the rest of it,”.

“I would like to bow out when I’m in reasonably good shape and on top of my game.

“We all know age catches up with everyone and I know as well as anyone that I was twice the player at 18, 19, 20 than maybe I am now.

“But the manager thinks I’m still good enough to play a part in the team and more importantly I feel I am still capable of contributing to the team.