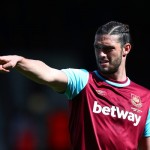 Carroll struck all three of the Hammers’ goals.

“Andy was outstanding, as you could see,” said Antonio to whufc.com.

“You don’t get a hat-trick without performing well and he did what we know he can do.