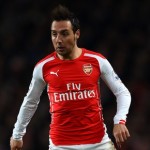 Reports are out claiming that Middlesbrough boss Aitor Karanka is a big fan of Arsenal midfielder Santi Cazorla.

Karanka has followed Cazorla since his time with Villarreal.

“He is the kind of player you don’t know if he is left-footed or if his is right-footed. He understands football perfectly. I have known him for a long time. For me, he is their best player.”