Reports are out claiming that Middlesbrough goalkeeper Tomas Mejias has revealed that Stewart Downing told him which side to dive for Wayne Rooney’s spot kick. 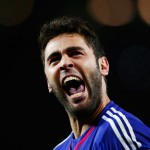 Mejias was the hero for Middlesbrough during their shootout victory over Manchester United in the Capital One Cup Round of 16 clash at Old Trafford on Wednesday night.

Now Mejias has gone on to reveal that he knew where Rooney was set to place his shot due to inside knowledge from former England star Stewart Downing.

Mejias said: “Honestly, I didn’t study how they usually shoot. We had practiced [penalties] this week with [goalkeeping coach] Leo Percovich because we knew we could reach that point. But I had not studied.

“Stewart Downing told me that Wayne Rooney shoots to the right, and I obeyed him. I stood until the end, and threw myself to that side. At the time of shooting, Downing pointed to the right and I decided to throw myself there.”