Transfer news are out claiming that Viktor Fischer has ended his time at Middlesbrough after just one season. 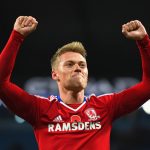 The winger, who joined the Teesiders from Ajax last summer, did not score a goal in his 13 appearances last season.

The Denmark international joins Mainz on a four-year deal.

Fischer told his new club’s website: “Mainz is the right club for me to enjoy my football again.

“Mainz is a beautiful city, we have a great stadium, I want to be a part of this team and this club quickly. I want to get in shape and then bring my qualities as an offensive player.”