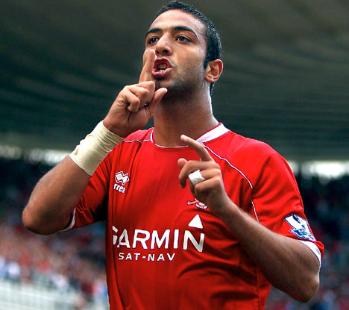 Relegated Premier League club Middlesbrough has been reported to have accepted an undisclosed offer from an unnamed club for Mido.

The Egypt striker, now aged 26, was fined by the club earlier this week for returning to pre-season training two weeks late following the north-east outfit`s relegation to the Coca-Cola Championship.

Middlesbrough manager Gareth Southgate had already admitted that he was resigned to seeing Mido and Tuncay exit the Riverside this summer, and the Boro boss also revealed that there has been a upturn in enquiries for the Turkey international forward.

He told the club`s official website that the interest has certainly stepped up. He also added that Middlesbrough have received an offer for Mido which the club finds acceptable and it is up to the player and maybe something will happen over the next week.

Mido joined Boro from rivals Tottenham for £6million back in August 2007 but ironically spent the second half of last season on loan at Wigan helping the Lancashire club secure their top-flight status.