Reports are out claiming that Liverpool goalkeeper Simon Mignolet has urged his teammates to look forward and to not dwell on their disappointing defeat against Manchester United. 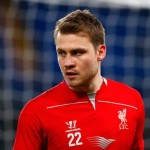 The Reds lost to arch enemies United 2-1 at Anfield on Sunday and as a result, the Red Devils opened up a five-point gap in fourth position.

Mignolet, who is currently on national duty with Belgium, told Sky Sports News HQ that it is vital for Liverpool to quickly forget about the frustrating display and focus on their next league fixture with third-placed Arsenal.

“It was disappointing to lose but I’m focused on the two games with Belgium and after that we have another big game away to Arsenal which is going to be massive in the race for the Champions League,” said Mignolet.

“First comes first, the focus is on the two games with Belgium and then we go back to England and we will prepare ourselves as best we can for Arsenal.

“We have to look forward. We’ll make sure that we do the things we do, there is still a lot to play for, we’ve got the FA Cup too so hopefully we can do well on both sides.”

Liverpool next face the Gunners at Emirates stadium on April 4 when the Premier League returns from the international break.