It has been reported that Mikel Arteta was thrilled with the way Arsenal performed in their 3-0 victory over Newcastle United on Monday night. 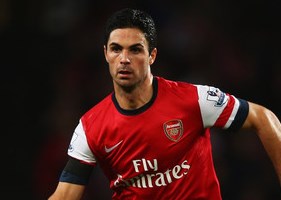 The Gunners produced a strong display at the Emirates Stadium to move four points clear in fourth position thanks to goals from Laurent Koscielny, Mesut Ozil and Olivier Giroud.

After the match, the Spaniard spoke glowingly of the Arsenal showing and highlighted the importance of having players like Ozil at full fitness and performing at their best.

Arteta told Sky Sports 1 : “It was a good win, I think we had most of chances and possession,”.

“I think the first goal was really important, we had to break them down. I think after they opened up in the second half and we created more chances so the clean sheet is massive and the three goals for us is very important.”

He added: “He’s (Ozil) very important for the team. He’s been missed while he’s been injured.

“We’ve missed very important players through an important period of the season so we’re really pleased to have people like him back in the team and performing at the top because that’s what we need.

“We needed to get back (to form) because everything is very tight. There’s only two games to go and we want to finish on a high.”