Reports are out claiming that Arsenal midfielder Mikel Arteta has supported the decision of Gunners boss Arsene Wenger to rotate his squad for Wednesday’s Champions League defeat at the hands of Dinamo Zagreb. 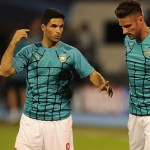 Despite suffering a 2-1 loss in Croatia, Arteta said that Arsenal’s heavy schedule made the rotation policy necessary in order to keep players fresh.

“We have so many games coming up,” Arteta told reporters.

“The manager said that he was going to make a few changes and I think that we were still good enough to compete with a Dinamo Zagreb side.

“We had the chances but we didn’t take them. The manager tried to create the best balance for the game but we didn’t make the most of it.”