It has been reported that Mikel Arteta loves playing for Arsenal boss Arsene Wenger. 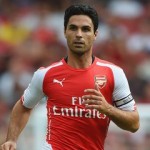 Arteta does not hesitate to defend Wenger against accusations of too much flair and too little caution.

“I’ve played in lots of different teams,” said Arteta. “I’ve played long balls and short balls and, believe me, if you love football you want to play the Arsenal way.

“When I joined Everton and we had big Duncan Ferguson, Alan Stubbs and David Weir, the football was very direct because of the players we had. David Moyes started to buy more quality players and tactics progressed, but at the start we were very physical.

“We were the best in the league at doing that, so why would we not play long ball? That’s why he put me on the wing, so I could cross the ball, as I didn’t get it in midfield.

“Arsenal don’t have to change. The manager believes in this style 100 per cent but we have to find our defensive solidity. It’s one thing to be cautious and another to be careless.”

Lucho Gonzalez Linked With A Move To Arsenal