It has been reported that Arsenal midfielder Mikel Arteta expects a tough battle against former club Everton this weekend. 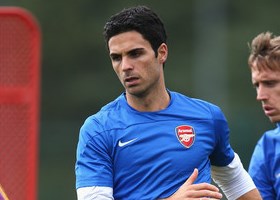 The Spanish international left Everton for the Gunners last year.

Looking ahead to Sunday’s visit of his former club Everton – fourth after winning at champions Manchester United – Arteta said: “They’re having a great season and they’ve got great results against top teams.

“It was a big result at Old Trafford on Wednesday, it was massively important for them and will boost their confidence.

“We’re going to face a really difficult team for sure. I know Roberto Martinez well and he’s the type of manager who wants his players to play good football. Hopefully it can be an exciting game.

“In the transfer window they did really well and improved the team. They deserve to be up there.”