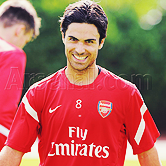 Arsenal’s latest signing Mikel Arteta is reportedly counting down the days for his debut for the club.

The former Everton midfielder joined the Gunners last week toward the end of the transfer window.

“I can’t wait to play at the Emirates, I think it’s an unbelievable stadium. I’m so excited.

“I have always been a big admirer of the Arsenal philosophy, the way they play, the way they do the job, and it’s always exciting watching Arsenal play. In England there is no better team to watch than Arsenal.

“Hopefully I will not take long to adapt but obviously you need to meet new characters, new personalities and new players with different abilities so you need to pick that up as soon as possible to get an understanding on the pitch.

“But I have been watching a few videos and have got some work done before training and hopefully that will help me.” Arsenal can finish second in the Premier League – Wenger