Reports have emerged claiming that Arsenal captain Mikel Arteta has quashed any rumours of an exit from the Emirates Stadium by reportedly signing a new one-year deal with the Gunners. 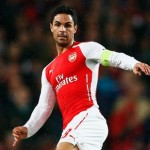 Arteta’s extension means that Arsenal boss Arsene Wenger is now unlikely to venture into the transfer market in search of a new defensive midfielder.

Wenger had previously been linked with Southampton midfielder Morgan Schneiderlin, but is said to have been put off by the Saints demands for £25million-plus for the French international.

Doubts had been raised over whether Arteta would commit to Arsenal after the 33-year-old postponed signing an extension until the summer.

Securing the Spaniard will come as a boost to Wenger, who will now believe he has a full complement of midfielders, with Arteta competing alongside Francis Coquelin, Jack Wilshere, Aaron Ramsey, Mathieu Flamini and Tomas Rosicky.