It has been reported that Mikel Arteta feels Arsenal’s next two fixtures can be the catalyst for a successful season. 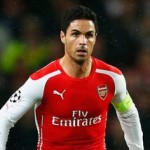 The Gunners were in top form in late September and early November before conceding three times in the second half to be held to a 3-3 draw with Anderlecht in the Champions League.

That disappointing result preceded a 2-1 defeat at Swansea City in the Premier League and even though Arteta is aware things have slightly dropped off in north London, he is planning for a return to form against Manchester United and Borussia Dortmund at the Emirates Stadium on Saturday and Wednesday next week.

“We have two games, against Manchester United and Borussia Dortmund, at home and if we get the crowd with us from the start and get the results then it will be a very different story again,” he told the club’s official website.

“It is a rollercoaster at the moment but we need to manage the emotion because this is a long-term situation and we need to be where we want to be in April and May, so let’s be patient.

“A week ago, after three wins in a row, the place was getting back to normal with everyone looking happy. Then after two disappointing results, (it is down).

“It is very demanding to play three or four times in 10 days and bad periods are going to affect the team. So you need everyone on their toes and ready to fight.”