It has been reported that Arsenal midfielder Mikel Arteta says manager Arsene Wenger must buy a new striker. 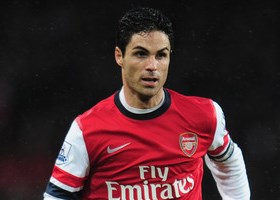 The Spanish midfielder is calling on boss Arsene Wenger to look at bringing in another striker in January’s transfer window.

Arteta told Cope: “There have been moments where we lacked finishing. We do not have the strikers Manchester City do to have more options.”