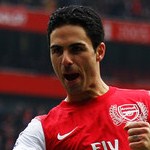 Mikel Arteta is convinced that Arsenal are back after their thrashing of Tottenham.

The Spanish midfielder is eyeing another stunning Emirates recovery against Milan in the return tie next Tuesday.

The former Everton star said: “After being knocked out of the FA Cup and the defeat in Milan we needed to react and this was the just moment. ”

“Now the Italians will think that the tie is not yet decided and that is good for us.

“To fight for fourth position in the table is our minimum obligation, but the Champions League is still not over.”