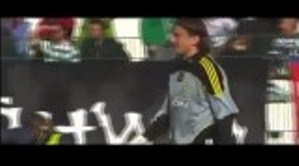 This beautiful goal was scored during the match between Wisla Krakow v Lechia Gdansk from the Polish Ekstraklasa.

Krakow midfielder Mikhail Sivakov scores a brilliant lob from just inside his own half.

On the break, Sivakov saw the Lechia Gdansk off his line and went for goal.

The brilliant goal almost resemble the goal David Beckham scored against Wimbledon when he played for Manchester United.