It has been reported that Crystal Palace captain Mile Jedinak believes they didn’t deserve defeat at Arsenal. 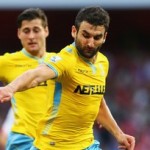 The Australian international hopes the Eagles can regroup for another London derby next weekend when West Ham United come to Selhurst Park.

“We addressed things as a group on Friday and said that we needed to put in a performance,” he said.

“The boys responded extremely well. I am massively proud of what they did, it is just a shame we did not get something from it.

“On the balance of the game we deserved at least a point, but it is something we need to learn from and quickly.” Arsene Wenger Pleased With The Appointment Of Andries Jonker