AS Roma midfielder Miralem Pjanic has admitted that the team are missing injured captain Francesco Totti. 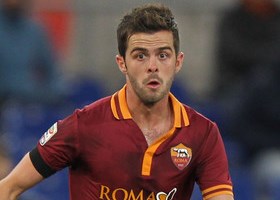 The veteran attacker’s absence has coincided with Roma’s run of draws in recent games.

The 23 year old told Sky Sport Italia : “Totti is something special for Roma,”.

“It’s not easy to play without Totti. When he’s not here, the team plays differently, as we are missing out strongest element.

“I won’t say we lose confidence without him, but we are accustomed to always having him on the field. When he’s not there, we are missing a reference point. All the play goes through him, so Roma have to play differently without Totti.

“He is an important player, certainly, but despite all that we proved that we can do well without him.”

Stefan Kiessling Attracting Interest From The Serie A Francesco Totti A Legend Throughout The World! – Thomas Muller Arsenal Target Adrien Rabiot In Talks With AS Roma