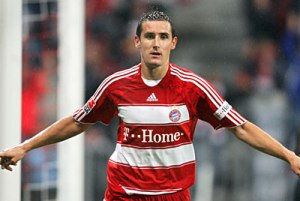 The German international striker did not join the German national team for training or take the pitch with his club for a Thursday practice session as he is being monitored.

Bayern Munich officials confirmed that Klose was being watched closely and said he would remain at his home until further notice.

Club officials also revealed that Klose and his wife Sylwia are currently being monitored closely.

It is unsure if Klose will attend a memorial service for Germany goalkeeper Robert Enke who committed suicide on Tuesday or if he will be available for Germany’s international friendly against Ivory Coast on Wednesday.