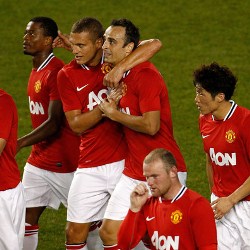 Manchester United continued their encouraging preparations for the new season as they dispatched David Beckham’s MLS All Stars 4-0 in New Jersey.

Two goals each side of half-time from Anderson, Park Ji-sung, Dimitar Berbatov and Danny Welbeck were more than enough to see off the All Stars who could not stop the Premier League champions’ pre-season goal-scoring machine.

From the opening whistle it was obvious that this game was going to be more competitive than the average pre-season friendly and it started at a tremendous pace, but it took a while before any real chances were created.