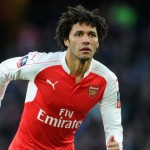 The Gunners, who have a game in hand on leaders Leicester, are 11 points off the summit with eight league games remaining.

“The league is our only available title this season, we won’t let it go easily,” said the January signing.

“Arsenal is one of the best teams in the world, I feel so happy because the boss and my team-mates trust in me.”