Reports are out claiming that French club Monaco have signed Stephan El Shaarawy on loan from AC Milan. 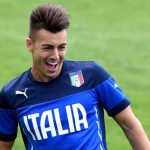 The 22-year-old Italian international striker has signed a season-long deal with the principality outfit after being pushed further down the Rossoneri pecking order following the arrival of Carlos Bacca from Sevilla.

Monaco have the option of sign El Shaarawy, who has continuously been linked with Arsenal in recent times, on a permanent deal at the conclusion of his loan agreement.

El Shaarawy scored just three goals in 19 outings for Milan last term as he once again battled varying injuries but is determined to play consistently for Monaco.

“It’s a great feeling to sign here in Monaco. I am very happy and very moved,” he told his new club’s official website.

“I thank the president of Monaco for this opportunity. I hope to have a great season with Monaco and give pleasure to the fans.” Arsenal Youngster Alex Iwobi Called Up To The Nigeria Squad