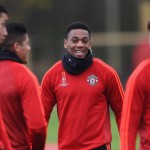 It has been reported that AS Monaco coach Leonardo Jardim insists Manchester United striker Anthony Martial is worth the €80 million fee he left for.

The French international signed for United on deadline day in September.

Jardim said: “From the moment someone puts a price on the table, he’s worth it. Martial is a player that we valued.

“I will need time to make us stronger again.”