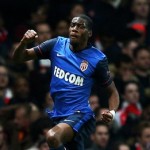 Reports are out claiming that AS Monaco are prepared to listen to Premier League offers for Geoffrey Kondogbia.

The Daily Express reported that Arsenal and Manchester United are interested in the midfielder.

The 22-year-old’s impressive form this season – notably his recent goalscoring display against Arsenal in the Champions League – has put the Gunners and United on red alert.

The pair are expected to make summer bids for Kondogbia, with reports in France claiming that Monaco value his services at £14.5m.