Reports are out claiming that AS Monaco are keen to re-sign Tottenham striker Emmanuel Adebayor. 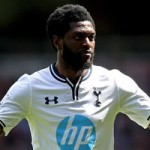 The Daily Mail claims that chairman and co-owner Dmitry Rybololev has identified the former Arsenal striker as a summer target despite the fact he is yet to appoint a new manager following Claudio Ranieri’s departure.

Tottenham, however, will not make a decision on Adebayor’s future until a new manager has been appointed.

Adebayor, 30, spent three years at Monaco before leaving for Arsenal in 2006.

Jan Vertonghen : Tottenham Not The Only Club For Me!