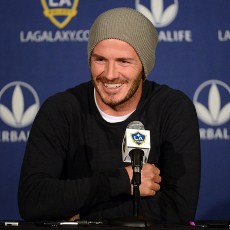 It has been reported that French club Monaco are believed to be the latest club showing interest in the services of David Beckham.

The former England international captain will end his six-year stint with LA Galaxy following this weekend’s 2012 MLS Cup final against Houston Dynamo and there has already been a frenzy of excitement surrounding where the former Manchester United star will end up.

Sky Sports reported that the French club, owned by Russian billionaire Dmitry Rybolovlev, have stuck their toe in the water in regards to bringing Beckham to France’s Ligue 2.

Monaco has already been linked with Chelsea’s Frank Lampard but the club quickly dismissed that as speculation and are now hoping to lure Beckham but reports suggest the club is not at the top of his list.

Landon Donovan Is Everton’s Player Of The Month