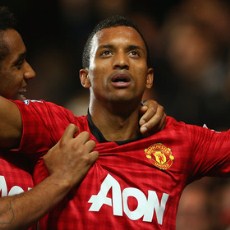 Monaco are in negotiations with Manchester United over the transfer of Portuguese winger Luis Nani, according to reports in France.
The 26-year-old wideman has only one year left on his Old Trafford contract and will be allowed to leave after two frustrating seasons when he failed to fulfil the potential he’d shown earlier in his career.

Monaco have made a big splash in the transfer market already this summer by signing Joao Moutinho and James Rodriguez from Porto, Falcao from Atletico Madrid and ex-Real Madrid defender Ricardo Carvalho – deals all brokered by Portuguese super agent Jorge Mendes.

Mendes represents Nani and has seemingly persuaded the ex-Sporting starlet that Monaco would be a good move for him after he started just 10 Premier League games for United last season.

United hope to bank close to £18million for a player who cost them over £20million in 2007, while clearing his almost £5million-a-year salary from the club’s wage bill will give new boss David Moyes enough room to bring in a couple of his own signings.

Nani is currently training with Portugal where he is now expected to start their World Cup qualifier against Russia on Friday, having shrugged off a thigh injury.

If we don’t buy quality players, i will leave – Koscielny