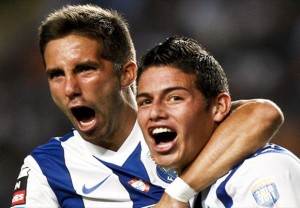 Goal.com reports that Porto duo Joao Moutinho and James Rodriguez have joined Monaco in a transfer deal worth €70 million.

The French club confirmed the two acquisitions on Friday though did not reveal the cost of either player, however, due to the Portuguese side being on the stock market, the cost of the duo has been unearthed.

Moutinho, who was linked with a January move to Tottenham, has cost the newly promoted Ligue 1 outfit €25m, while Colombian forward Rodriguez has fetched an enormous €45m for the Primeira Division champions.