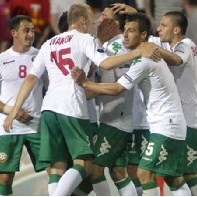 Montenegro missed the chance to overtake England at the top of Euro 2012 qualifying Group G when they were held 1-1 at home by Bulgaria in Podgorica.

Radomir Djalovic put the home side in front eight minutes after the break with a fine left-footed volley from a pinpoint left-wing cross from Vladimir Bozovic.

They were denied victory when Bulgaria striker Ivelin Popov scored from close range midway through the second half — the first goal have conceded in the campaign.

Bulgaria survived a few nervous as Savo Pavicevic hit the post with a 20-metre shot and Marko Basa headed against the bar from Nikola Drncic’s corner.