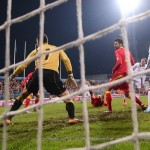 England’s path to World Cup qualification remains far from guaranteed as Montenegro battled back to earn a deserved draw in Podgorica.
Wayne Rooney’s early header – his fifth in six games he has played for England since Euro 2012 – was reward for an enterprising and positive opening half.
England, however, paid a heavy price for failing to capitalise fully on that superiority and for a dreadful second half display lacking any semblance of composure or cohesion.

Montenegro’s confidence and pressure increased as a disjointed England survived a series of narrow escapes before substitute Dejan Damjanovic scrambled home the equaliser with 13 minutes to go and give them the draw that keeps them two points clear of England at the top of Group H.