It has been reported that Montpellier midfielder Remy Cabella has opened the door ajar for a possible summer transfer to Newcastle United. 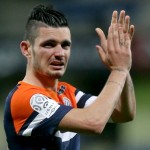 The 24-year old Frenchman was a target for the Magpies in January but the north east club was unsuccessful in their pursuit as they chased a replacement for Yohan Cabaye who left for Paris Saint-Germain.

Nevertheless, it appears as though thr former France U21 international could be pondering the possibility of moving to St James’ Park if the Toon were to go after him again in the next transfer window.

“I have an arrangement with Montpellier in case an interesting offer pops up,” said Cabella.

“Newcastle is a good club in England.

“We will see what the coach will tell me.”

It is believed that French Ligue 1 rivals Marseille are also showing interest in Cabella who scored 14 league goals in 37 appearances in the 2013/14 season.