Morgan Schneiderlin has admitted that his first weeks with Manchester United have been a whirlwind. 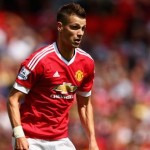 The French international joined United this summer from Southampton.

“In four weeks in Manchester I have done more media and commercial activities than I did in eight years at Southampton! It makes you realise straightaway how big it is. It’s nice. It’s part of the job to be a football player.

“Of course, you play in front of more fans but, after that, it is a football game. In a football game the size of the pitch stays the same, it’s as simple as that. There is more expectation on you, more focus on your performance, but it doesn’t scare me.

“My debut was a special moment. I tried to put it out of my mind. I needed to be focused on the game, to have a good performance. The team performance wasn’t the best, we know that. We know we can still progress and will progress. The most important thing was a win to start with, so it was probably the perfect result.”