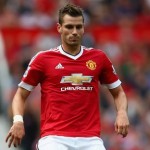 The France international midfielder, 25, joined from Southampton in a £25m deal this summer.

“I hope to become like him (Keane) because he was a legend,” Schneiderlin told France Football.

“He has a different personality from me. I speak less on the pitch.

“But I hope to have the same impact as him on the team. His battles with Patrick Vieira, when United and Arsenal were in competition, were memorable. I watched a documentary on the rivalry between the two – it was interesting.”