Reports are out claiming that Morgan Schneiderlin has revealed his reasons for choosing to join Manchester United. 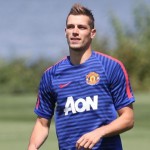 The French international midfielder completed his £25million move from Southampton to Old Trafford earlier this week but could have as easily signed with Arsenal or Tottenham who were both showing significant interest.

Schneiderlin has spoken out about his United choice, suggesting that he now feels ready to play for a big club.

“I could have left before but I felt this was the right move for me.

“I feel physically in the best shape possible, and I feel with my confidence levels that I am ready now to move to a big club.

“Today I am the happiest person in the world to sign for the biggest team in the world and last year I had a good season, I felt good, like I progressed and now I am ready for Manchester.” Arsenal To Spend Big In The Summer Transfer Window