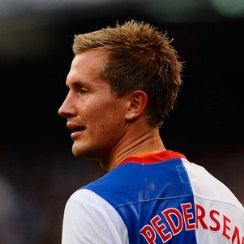 Morten Gamst Pedersen has no ambitions to leave Blackburn Rovers provided he is wanted at the club.

The Norwegian agreed a new four-year contract in May 2010, and arrived from Tromso in a £1.5million deal in the summer of 2004.

“I will stay here as long as I can and as long as they want me to be here. I’ve still got two-and-a-half years left on my contract and I want to finish that,” he told FIFA’s official website.

“There was a lot of speculation because I took some time to sort this contract out, but Blackburn was always my first choice and they’ve been taking care of me in the good times and the bad.

“I think it’s a great club to be at, they treat you well. I’ve been here so long I feel like a part of the club, I’m the longest-serving player at the moment and I’m really proud of that.”