Mourinho : Beating Barcelona Was The Greatest Moment Of My Career 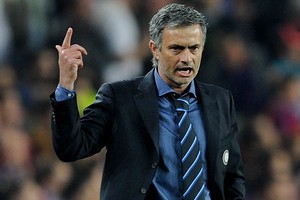 Inter Milan manager Jose Mourinho has rated the Champions League semi-final triumph over Barcelona as his greatest moment of his career.

The Italian club progressed to the final of European football’s premier competition 3-2 on aggregate over the defending champions and the Portuguese tactician was jubilant after the second leg which his side lost 1-0.

“It’s been 38 years since Inter played in the final,” he said. “This is not a team of young players who can wait 15 years to make the final – they will not have another 10 opportunities to play in one.

“Against Barcelona, it’s difficult with 11 players but with 10, it’s an historic achievement to win like this. It’s the most beautiful defeat of my life.”

Mourinho said that there was still plenty to achieve this season but would definitely soak up this latest victory.

“We have five games left in all competitions. Tonight we will party, tomorrow we will sleep and after that prepare to face Lazio on Sunday.

“I ask the fans for another favour – come to Milan airport and welcome this splendid team home. Come to Rome on Sunday for the game with Lazio and then come to the Italian Cup final next Wednesday.

“I was close to the fans when I was at Chelsea, but I am even closer to the Inter fans. I love Inter and the supporters, but not Italian football. I respect it, but I don’t love it.

“I thank everyone who played and who did not play. I thank all the fans, those who were here and those who remained at home. Absolutely incredible things happened.”