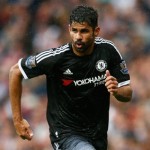 Reports are out claiming that Chelsea boss Jose Mourinho is convinced Diego Costa is being unfairly targeted by match officials.

The Brazilian born Spanish international striker was involved in a running battle against Brazilian Fernandinho last weekend — a war the Manchester City man won by scoring the third after escaping a red card for catching Costa’s head with an elbow.

“If it’s Diego Costa that does that I can guarantee you a red card,” said the manager. “If not a red card then video footage and a suspension.

“I think enough time (has passed) to forget his reputation, because tell me when was the last time something happened.”

When asked if Costa is being punished for merely reacting to deliberately antagonising play from opponents, Mourinho said: “Yes.”