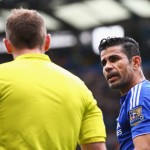 It has been reported that Chelsea boss Jose Mourinho believes Diego Costa is receiving unfair treatment from match officials.

The Brazilian born Spanish international striker was in a spiky mood yesterday during defeat to Crystal Palace.

Mourinho hit out after Manchester City’s Fernandinho appeared to elbow the striker but was not punished.

He said: “I guarantee that if Diego Costa does that it would be a red card; if not, there would be video footage and suspension.

“I don’t think he is too physical. What I see is him doing his job and no more. Enough time (has passed) to forget his reputation.”

Mourinho claimed opponents were deliberately targeting Costa, but he is the one who ends up getting punished when he reacts.

And he added: “We were told to behave in the technical area and we are, but what can you do (about Costa incidents)

“Referees have the power to analyse and to decide. We can do nothing.”